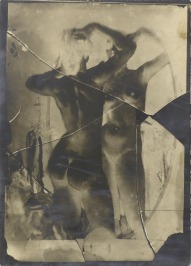 ca, 1934
Vintage gelatin silver print, inverted colors, contact print on matt paper. 180x128 mm. The two offered photographs (A60/39 and A60/40) present a completely rare demonstration of the work of Fotoskupina pěti (F5), the most radical avant-garde group of the interwar period in Czechoslovakia. This group consisted of five students of prof. Emanuel Hrbek in Brno’s Škola uměleckých řemesel (Applied Arts School). Josef Jiří Kamenický studied decorative painting, while Jaroslav Nohel, Bohumil Němec, František Povolný and Hugo Táborský studied typography and commercial graphics. These students asked prof. Hrbek for photography lessons and thanks to Hrbek’s connections the students could use the professional equipment of Brno’s VUT. Hrbek, who had modern ideas, supported the students in their experimental work and thanks to these factors a surprisingly radical ensemble of young and daring pioneers of extreme photographic experiment formed in Brno between 1933 and 1936. There are only a few dozen known photographs by the members of the F5 group, but this does not take away from their progressiveness. In the case of Josef Jiří Kamenický, we know only of one preserved example in the collections of Moravská galerie v Brně (MG 8290), one in a private collection and another is known from literature. In the case of Jaroslav Nohel, there are 21 known photographs in the collections of the Moravská galerie v Brně. The F5 group stood against the outdated pictorialism, but also (and maybe above anything else) against purism, which maybe went in the right direction in 1924, but by the beginning of the 1930’s it appeared to be exhausted and didn’t have anything new to offer. As Karel Teige wrote in 1921: “nothing ages so quickly as modernism” and that was the reason why the young students looked for new and unexplored ways in the photographic experiment, tried to move the borders of photography and to freshen up photographic modernism. They did exactly what purism refused: they interfered with the negatives and positives, played with the photographs manually and chemically and created brand new techniques, which were exhibited by artists unrelated to Brno, like Raoul Ubac or Oscar Dominiquez, later in the 1930’s. They were also the first to import some of the newest photographic equipment, which emerged at Bauhaus. The experimental photograph of Woman nude in front of a mirror is definitely on par with the methods of the F5 group. This image in negative tonality was made from a broken glass diapositive, which was also chemically destructed on some parts. Processes of chemical destruction of the diapositive are most notable at the bottom left corner. It is precisely the destruction of the negative and the creation of so-called “Photo-graphics”, “Fokalks” or also “Strukturáže”, which appear globally for the first time around the group of F5 in 1934. In the light of all that has been said, it is evident that the photograph comes from the group F5, however determining specific and conclusive authorship is complicated. There is only a crossed out text by pencil on the back side and the absence of any handwriting makes it impossible to compare to other known examples. The most probable candidate for authorship seems to be Jaroslav Nohel or Josef Jiří Kamenický. Nohel was the first to present images in reversed tonality in Czechoslovakia. This technique appears for the first time in artistic photography in Bauhaus, where for example Gertrud Arndt experimented with it at the turn of the 1920’s and 1930’s. Nohel imported this technique as a hot new artistic method, which got to the F5 group from Bauhaus through Zdeněk Rossman, who studied at Bauhaus in 1930 and 1931 and who was friends with prof. Emanuel Hrbek. The members of the group influenced and inspired each other, nevertheless the only preserved reversed tonality photographs are by Jaroslav Nohel. Despite this, there are no women nudes among his known works. On the other hand Josef Jiří Kamenický specialized in photographing women nudes. There are only three known photographs of this artist, all of a woman nude. Vítězslav Nezval and Augustýn Škarda wrote about Kamenický and called him an author of “elephant nudes reminiscent of Picasso”. Škarda, who was a strongly conservative upholder of pictorialism, criticised the works of the F5 group for their supposed “epigonic imitation of modern surrealist painting”. As was said above, there are only three known existing images by Josef Jiří Kamnický, so it would be very bold to conclusively ascribe him as the author, although based on current knowledge, it is possible to say that most probably the author is either Jaroslav Nohel or Josef Kamenický. Lit: František Povolný, Mladá brněnská fotografie, Světozor roč. 34 č. 21, Praha 24. května 1934. Karel Teige, Foto Kino Film, Život II, Praha 1922, s. 153 – 168. Vítězslav Nezval, Fotoskupina pěti, Měsíc, č. 8, 1934, s. 10 – 11. Augustina Škarda, Směs, Fotografický obzor XLII, 1934, s. 94. Condition A/B.