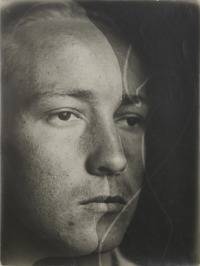 1934
Vintage gelatin silver print on matte paper. 236x177 mm. Marked in pencil on the verso "Nohel - Autoportrét". Nohel`s Self-Portrait is a variant of a well-known and several times exhibited photograph from the collections of the Moravian Gallery in Brno (MG 9529). Both photographs were probably created between 1933 and 1934, before the first exhibition of Group F5 (Krásná jizba, Prague, 1934). Nohel used the technique of hiding some parts of the negative. This technique was well known in advertising photography, for example, when removing interfering elements, but Nohel used it in a new way. Both photographs come from the same negative. The comparison of these two works shows how dramatically the resulting photograph can differ from the negative, and at the same time that even a relatively conventional image on the negative could produce an avant-garde photograph. Condition A/B.
Tiny spots in lower part.